I can't believe it's been 30 years since we got married. To celebrate, we booked a tour of Shimane and Tottori prefectures, and had a fantastic time. We did a tour so we could not have to plan, and drink without worrying about someone having to drive. We took the bullet train from Shin Yokohama to Okayama, then went on the tour bus to Adachi Museum, then to Tamazukuri Onsen for the first night. The second day was on to the Shimane Winery, Izumo Taisha shrine, then Misasa Onsen. The final day was the old warehouse town of Kurayoshi, the Tottori Port, and finally the Tottori Sand Dunes before heading back to Okayama. I'll give some details in this post. ♨️🫃🏼

We left our house at 7am, and made our way to JR Shin-Yokohama station, to get on the bullet train. We bought our lunches, boarded the Nozomi on time, and just enjoyed the trip. The tour included reserved "green car" (first class) tickets, and the seats were quite nice, comfortable, and included outlets to charge the devices. The Nozomi is an express service, and stops in only a handful of places. We got to Okayama in no time, then walked a ways to the bus terminal. We stowed our bags, boarded, and we were off. Next stop, the Adachi Museum.

We arrived after a couple hours in the bus. The garden is so well maintained and lovely, you can see why it wins awards, and the Takeuchi Seiho retrospective, the Waterscapes exhibit and the Rosanjin Hall all were such a pleasure to get to view up close. Such masterful detail. The Adachi Museum of Art was a sensory overload and well worth visiting. 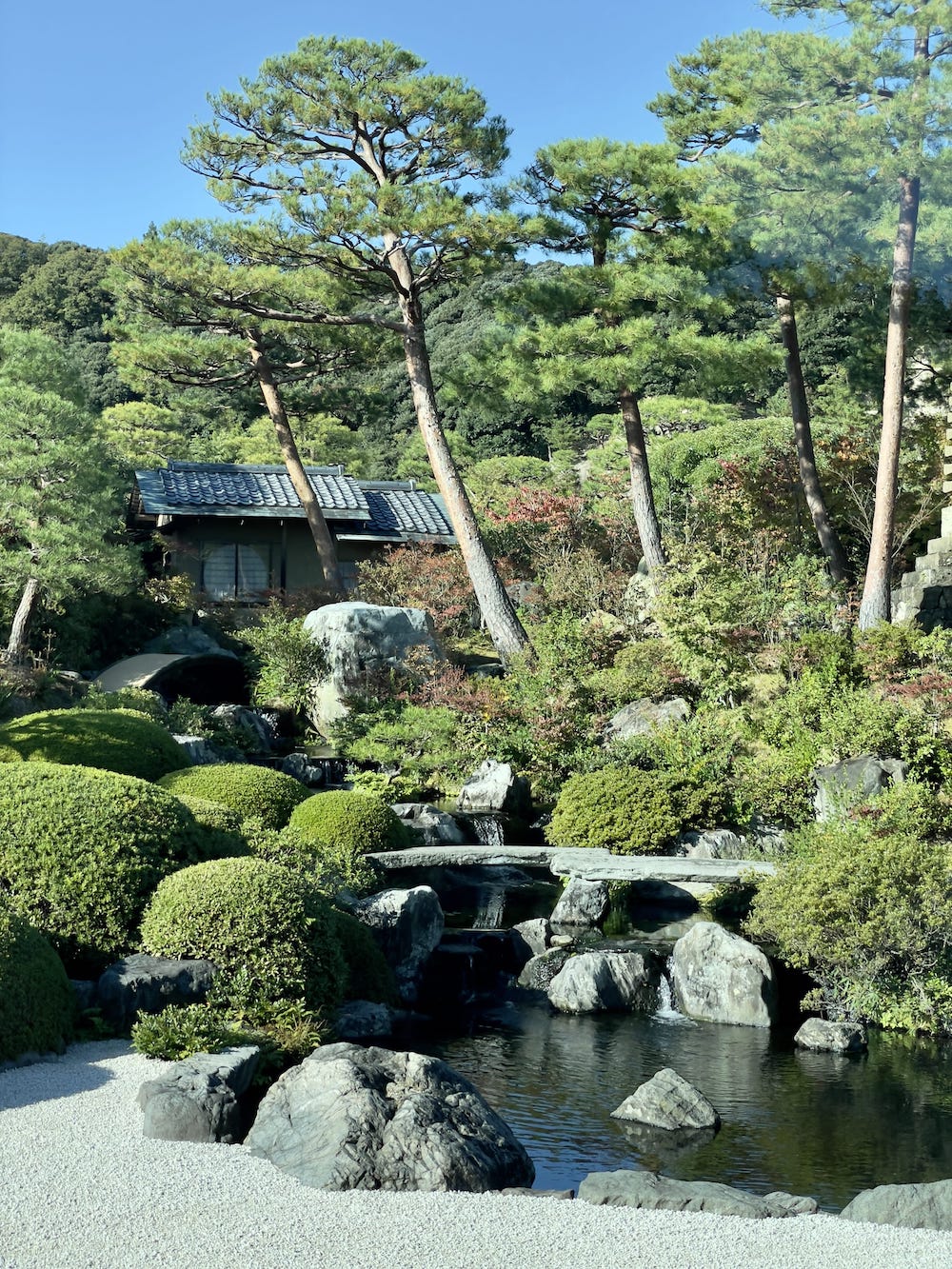 Next, on to an Japanese style "Ryokan" inn, in the the hot spring town Tamazukuri Onsen. Kasuien Minami was a wonderful experience. A traditional feel while being modern at the same time, the staff, the room, the baths, the award-winning garden and the food were all top notch. We had about 17 hours here, so we took advantage of the large bathing complex several times, enjoyed a huge multi-course "kaiseki" meal, and just relaxed. We got up early, took another bath, and had probably the best breakfast we'd ever experienced in any hotel or inn. The amount of choice was positively decadent. Just amazing. Afterwards, we got ready, checked out, and took a walk around the town to see the local deity statuary all around the river walk area. It was cool that they had QR codes to let you view a translation of the Japanese signage. 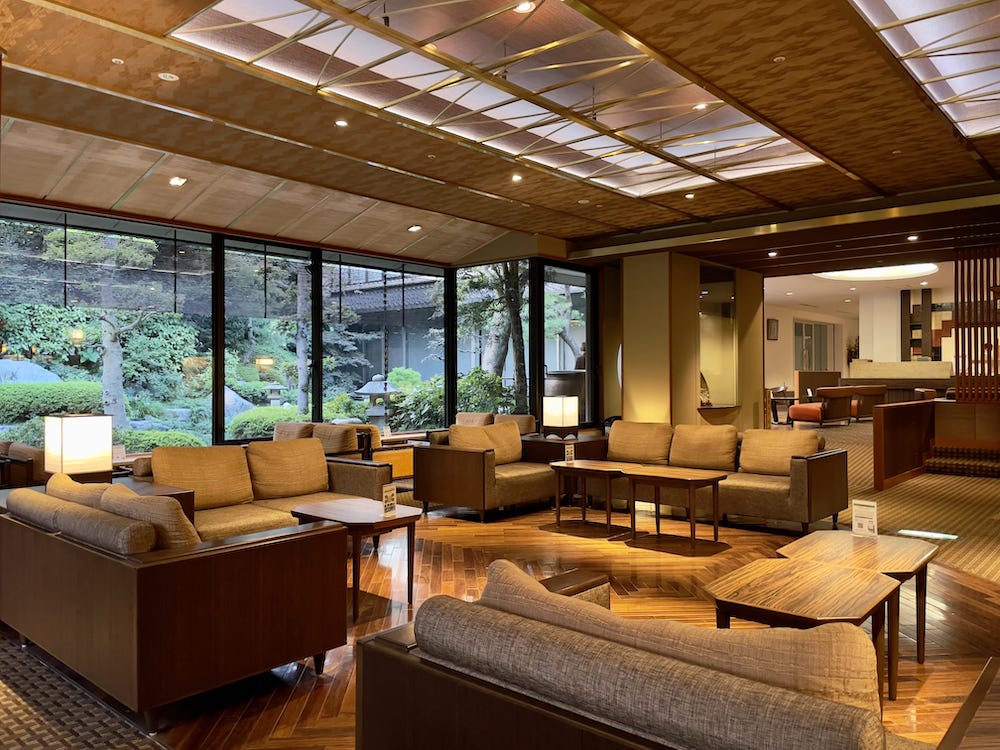 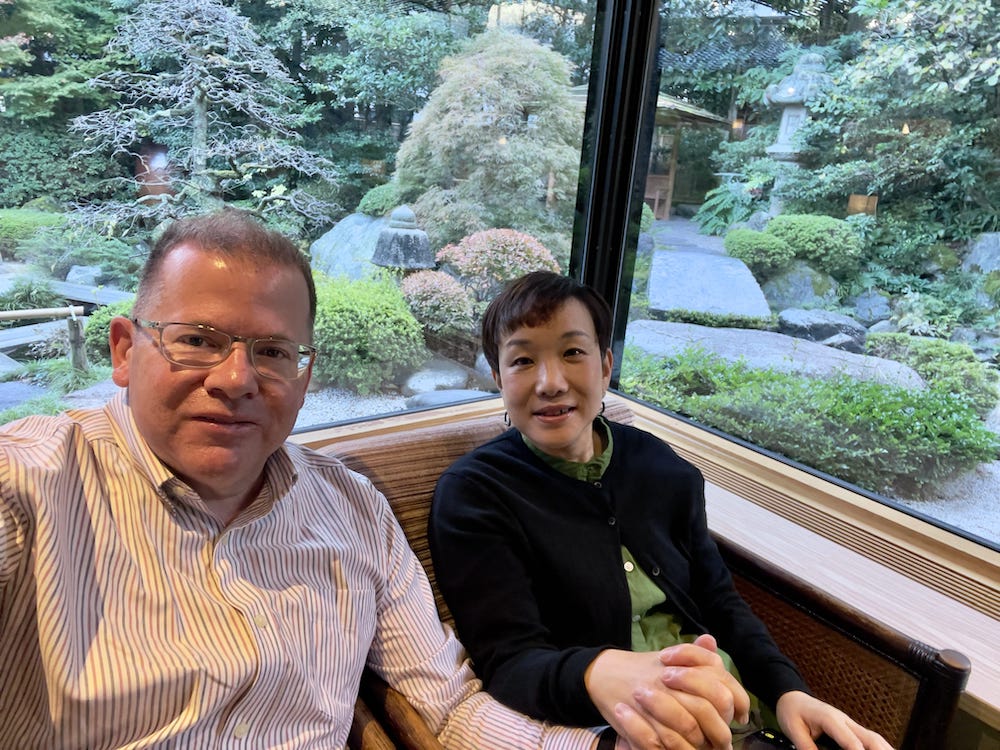 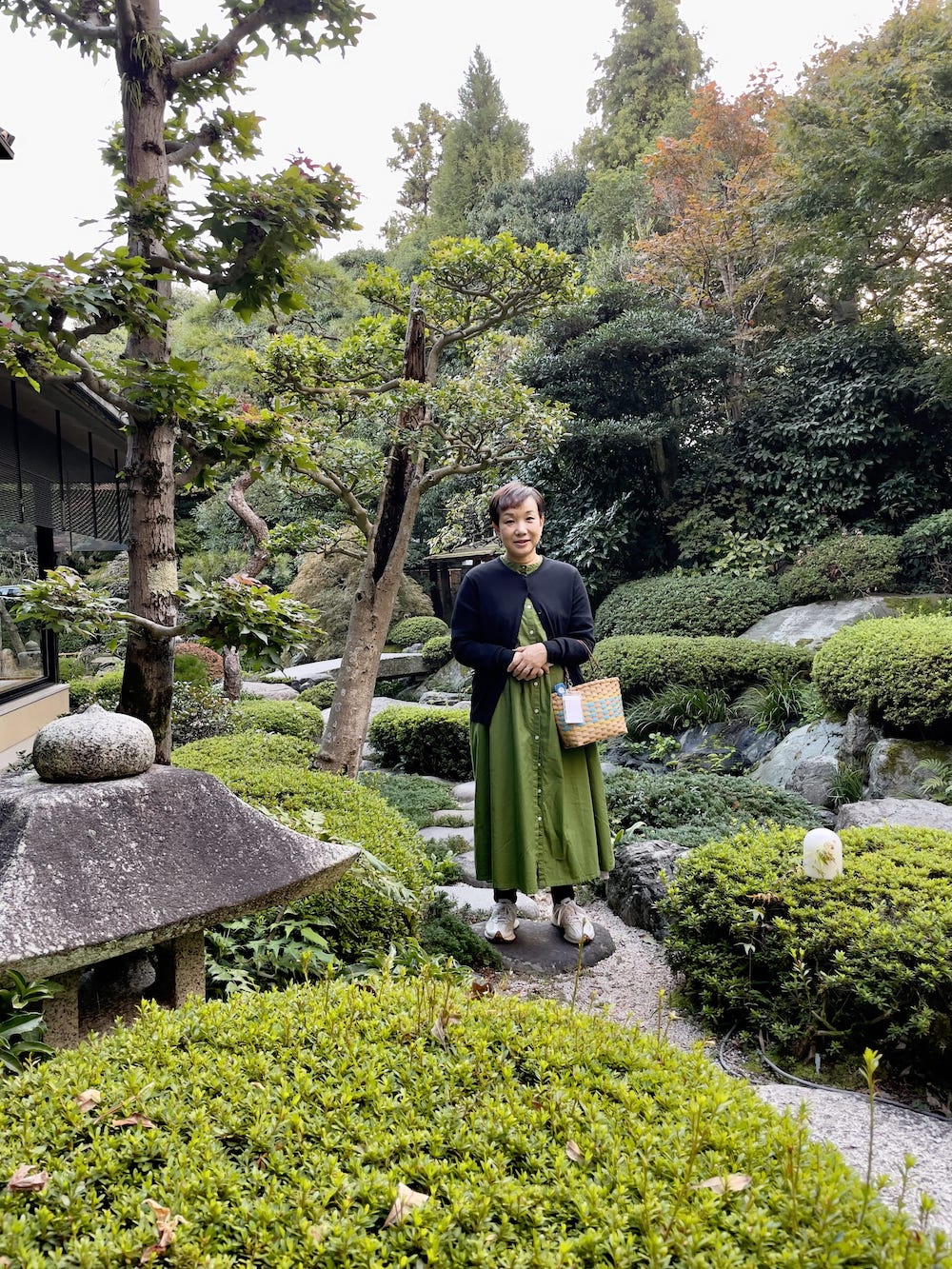 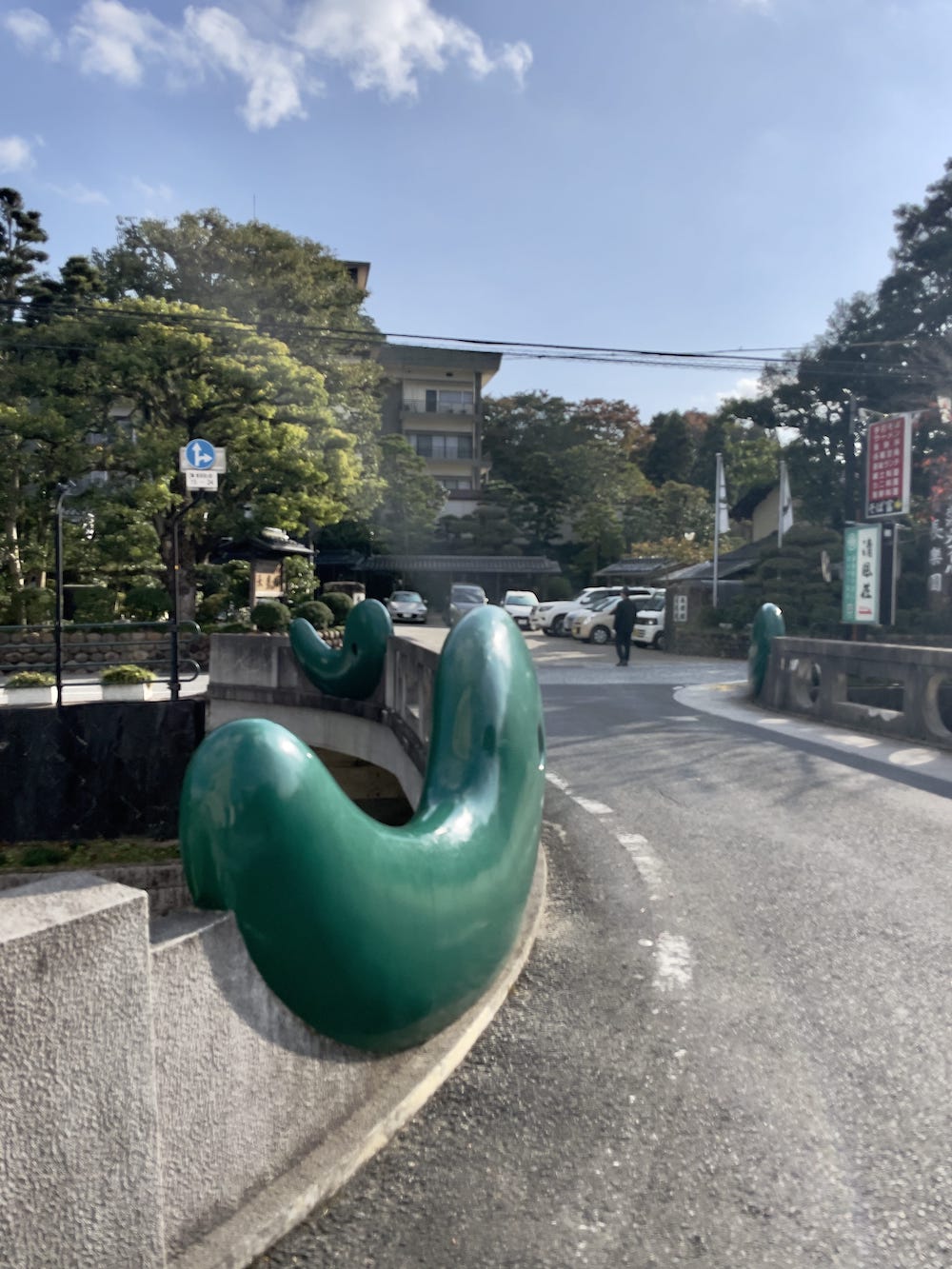 The next stop was the Shimane Winery for lunch and a little tasting. We were pleasantly surprised that the lunch was so good. It was meant to be quick, but, it was kaiseki quality, and the wagyu steak and sashimi was divine. The winery gift shop had a tasting bar which was closed, so we made do with some free samples of the various wines, and settled on a pair of wines that are specially made for November, when the gods come to visit Izumo Taisha.

Then a short jaunt around an interesting lake just off shore, to the train station. The train line we took uses recycled train cars from Tokyo, so we immediately felt nostalgic riding this train. The train has a rare switchback station, and so the train gets turned around so that if you were facing the lake, you're now facing the mountains. It took about an hour on the train to get to the station nearest Izumo Taisha shrine, but the scenery was really worth it - really lovely, and felt like a Miyazaki anime. 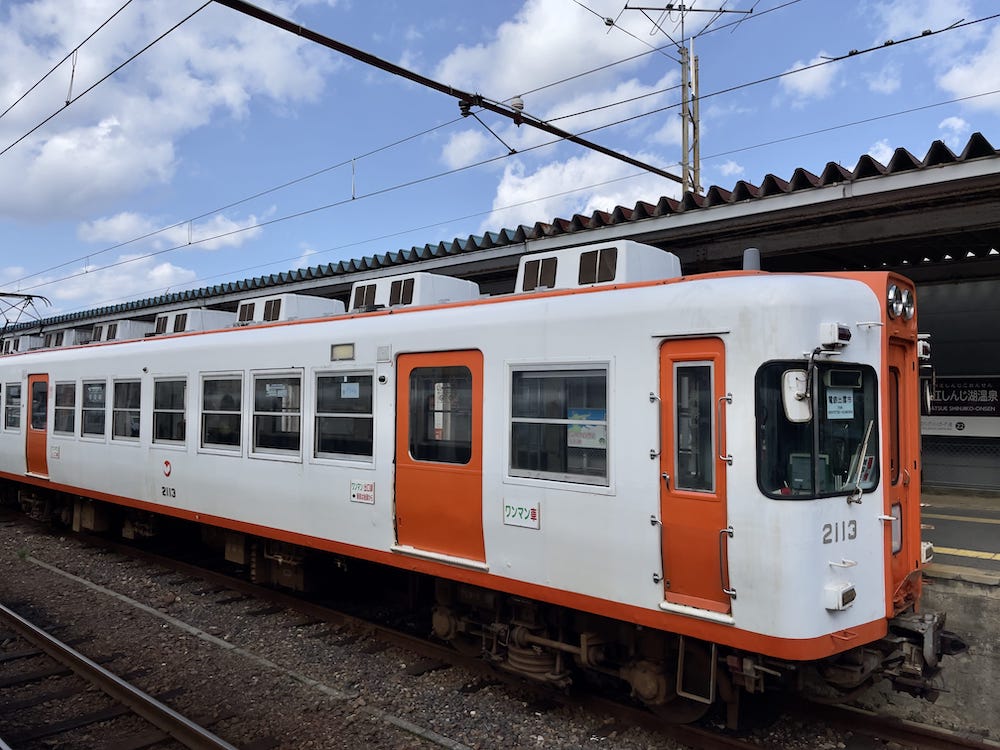 If Ise Jingu shrine is the number one since it houses Amaterasu, Izumo Taisha is the clear number two, housing the rest of the many, many gods. In Japan, the old way to refer to the tenth lunar month (generally equivalent to November) is 神無月 "kannazuki" or "the month without gods" while at Izumo Taisha, it's known as 神在月 or "kamiarizuki" or "the month with gods". We visited right during the crowded festival week, welcoming the gods back to the shrine. It was explained that the gods gather to hold discussions on matchmaking, determining the fates of their worshippers. Ceremonies and festivals held during this time are supposed to be sober, quiet affairs so as not to disturb their deliberations.

Our guide was a young person in her 20s from Okayama who said she was the oldest of 8 siblings, and she was really knowledgeable. She obviously had studied quite hard, and gave us an endless stream of informational anecdotes and tidbits about everything along the way in the bus, but also of course about Izumo Taisha. If I remember right, she said it was the only shrine where you go down into it, rather than up a bunch of steps. The four great torii gates were magnificent, although the largest one was under wraps, being restored or repaired in some way. The great しめ縄 "shimenawa" which you'll see in the pictures was truly imposing, especially when you're right under it making your offerings. As we explored, we also saw a very large flag of Japan, along with several wedding processions.

One point about making an offering at Izumo Taisha is, the process is two bows, four claps, and one bow, rather than the customary two claps at most shrines. The lay explanation for the 4 claps is given as standing for 幸せ, “shi-a-wa-se” or happiness, but the real etymology is supposed to be the saying 一霊四魂, or the four key aspects of a spirit: action, peace, loving protection & knowledge. I dug into this a little, and it appears that although this is only done on one day of the year now at a spring festival, the custom used to be eight claps, because 8 on its side looks like the infinity symbol.

Other thing we learned was, while the best coins to put in the offering box are either 5 or 50 yen ones (the ones with the holes) since "go en" means good relationships, you can also put combinations like a 10 yen and 1 yen coin, or a 100 yen and a 10 yen coin. I'll need to study about this a bit more.

At any rate, remembering "shi-a-wa-se" is easy enough, and my wife and I prayed at several locations in the grounds for our daughters to have good fortune in their lives and relationships, as well as for our own health. 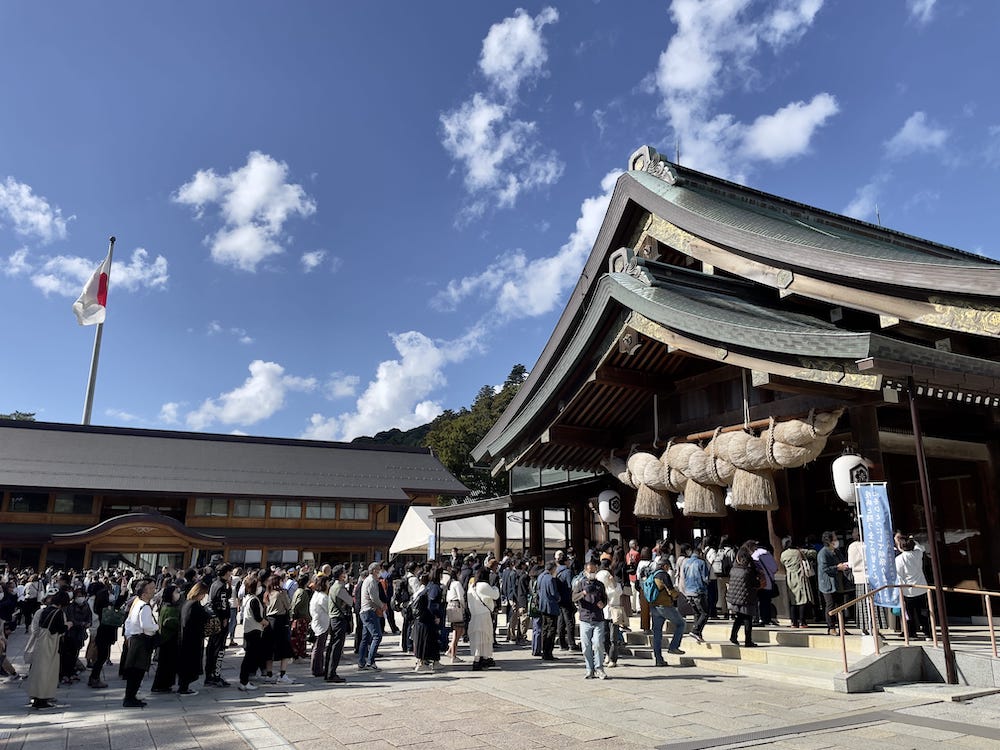 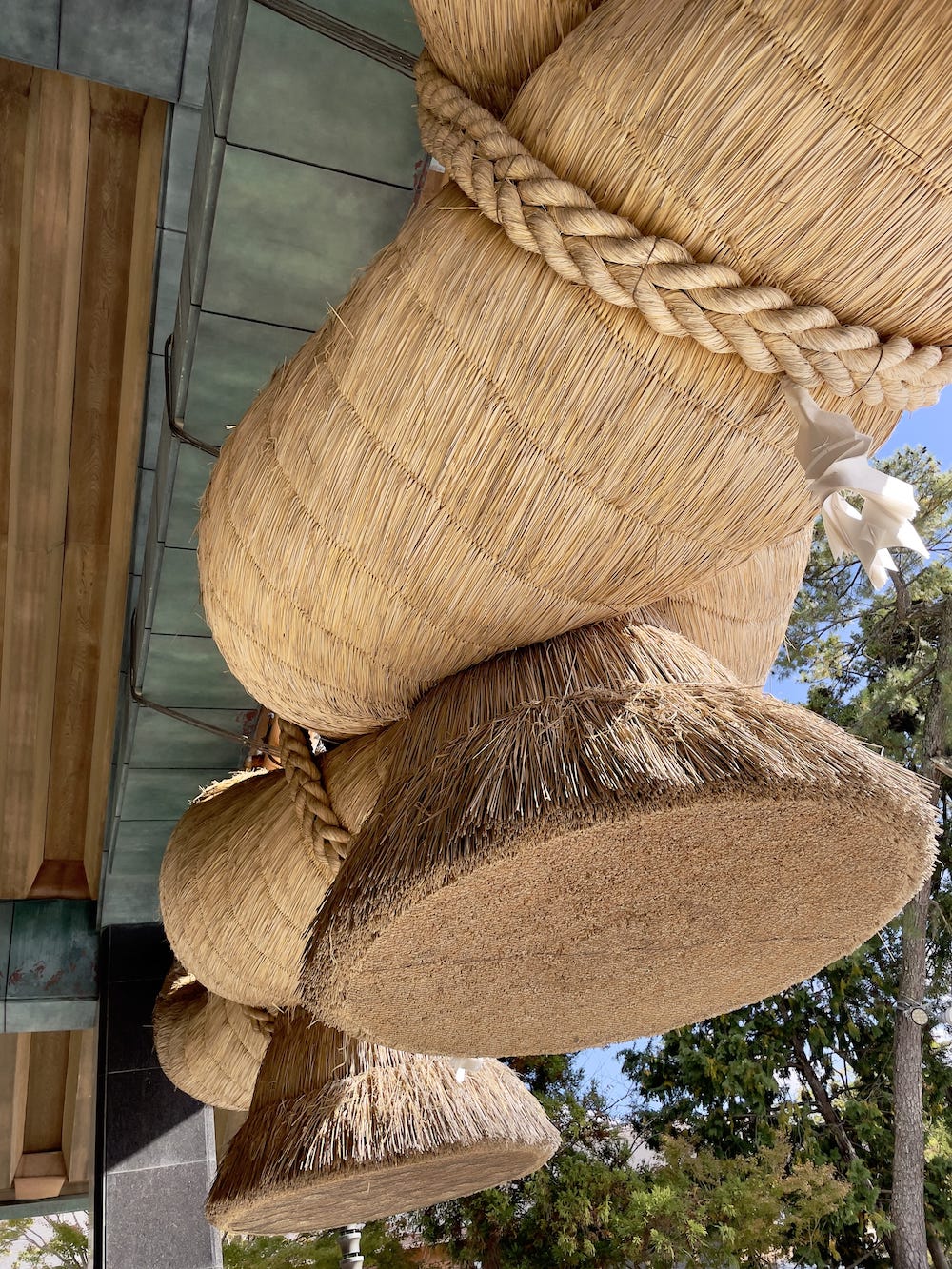 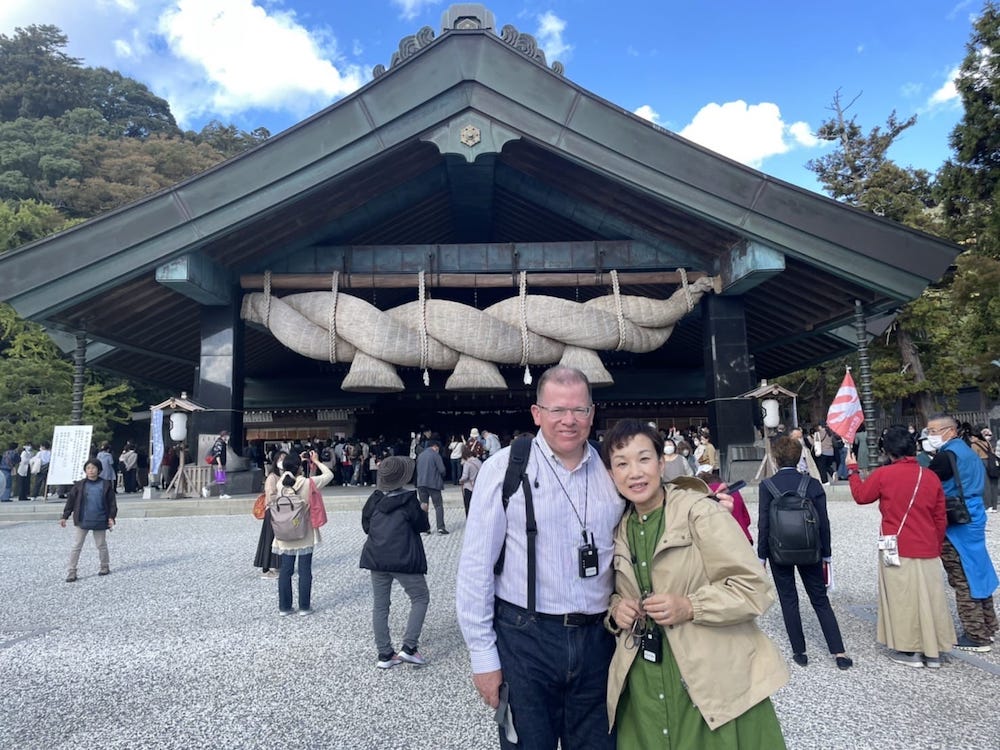 Next stop, Misasa Onsen. Izanro Iwasaki in Misasa Onsen is a wonderful older ryokan establishment, with friendly staff, clean rooms and facilities, really comfortable futon beds and pillows, fantastic food and a lovely garden that you can go out into. We even saw a frog in a pond in the garden, how appropriate for Japan. The views from our room were just super, and we could see the wide river and mountains from it. There’s a public bath right near the bridge, and we could see some tiny naked bathers enjoying it from our room. The bathing area is really large with many baths, and even has a radon steam room, the area being famous for that (there’s even a Marie Curie statue). The lounge area outside the baths on the first floor has coffee milk in a vending machine, and some delicious local ice cream to enjoy while you lounge around.

Tottori had a big quake in 2016, and there was unfortunate damage then to a famous teahouse in the garden. Maybe related, but the little town area on the other side of the river had some shuttered inns and looked pretty run down, but, there was a quaint little “ashiyu” foot bath over there, which we wished we had time for. We got a lot more soaking and eating and wandering in, before we left on the bus for the "white warehouse" area around 10am. 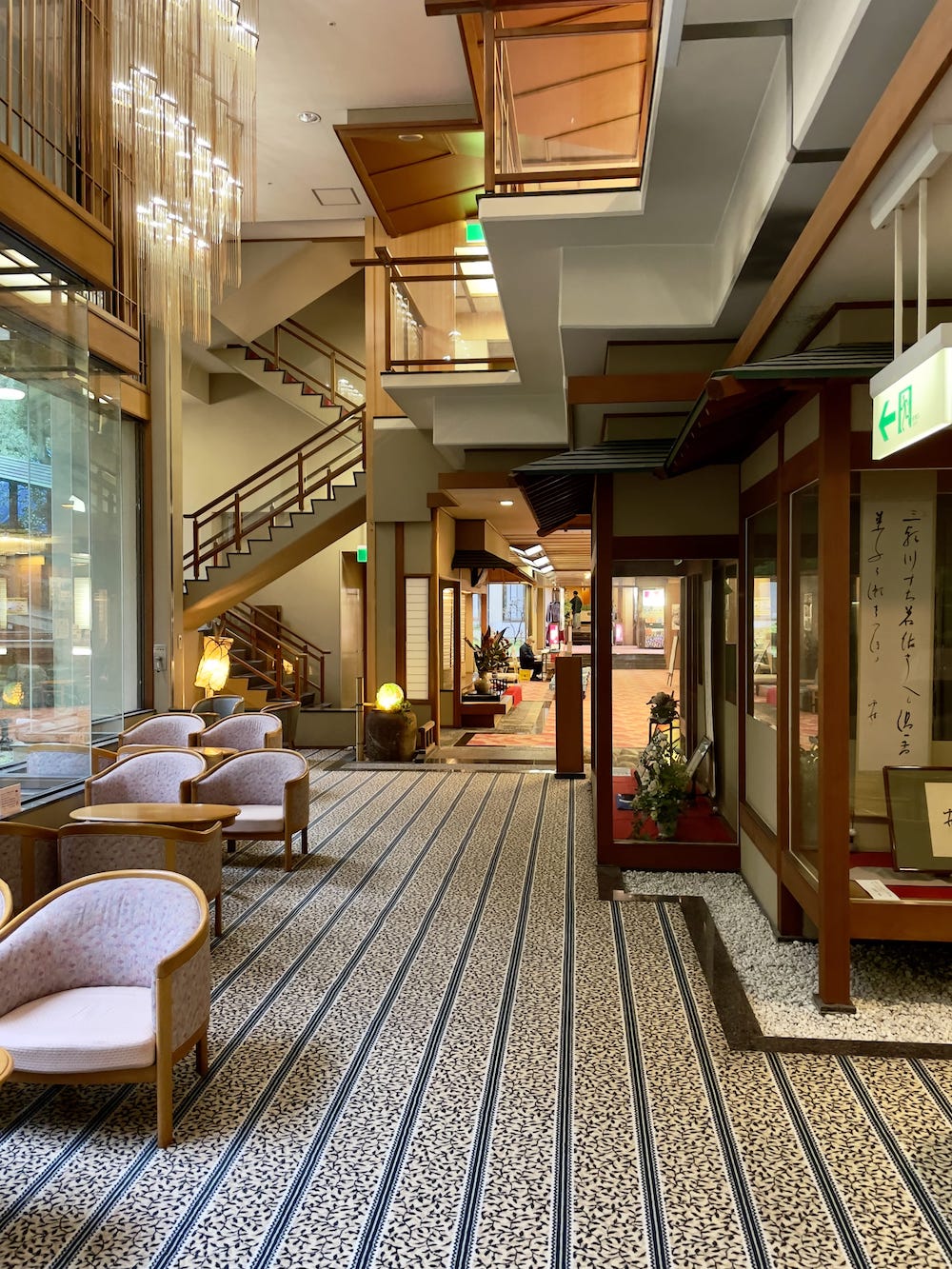 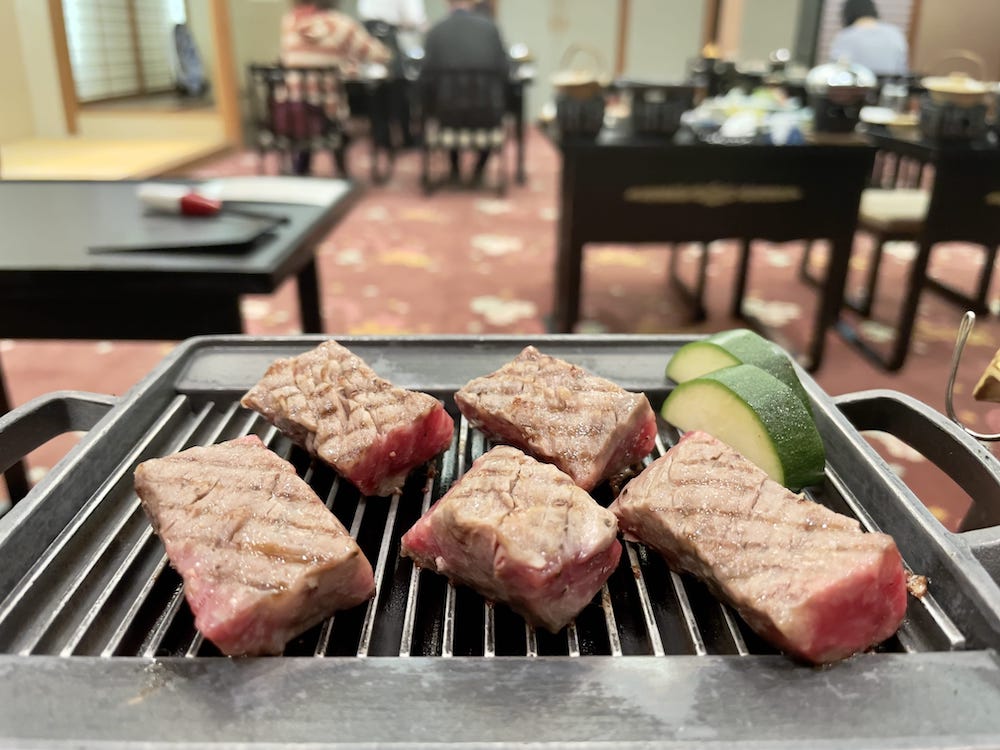 Next we did a one hour tour at Kurayoshi "Shirakabe" White Warehouses in Tottori, and it was fascinating! The warehouses were from various eras from Edo to Meiji, with glass that was warped due to the manufacturing methods of the day. The guide showed us all the various differences from era to era, from building heights to construction styles, which was really cool. The red "Sesshu" tiles looked lovely against the white walls and black burnt cedar wood skirtings. It was great to learn about the architectural style of these protected buildings.

One oddity was that several shops had life sized "sexy anime mascot girl" cutouts in their store fronts. Maybe "otaku" types would like it, but, these were jarring and added nothing to the history or attraction of the place. Our regret here was that we wished the tour let us have time to browse a bit as there was a craft beer brewery shop, a cool looking café, gallery, local goods, and others which were beckoning. Also it was raining. They say “in Tottori, even if you forget your bento, don’t forget an umbrella” because the wet weather there is so unpredictable.

Next was lunch at the port, and on to the dunes. 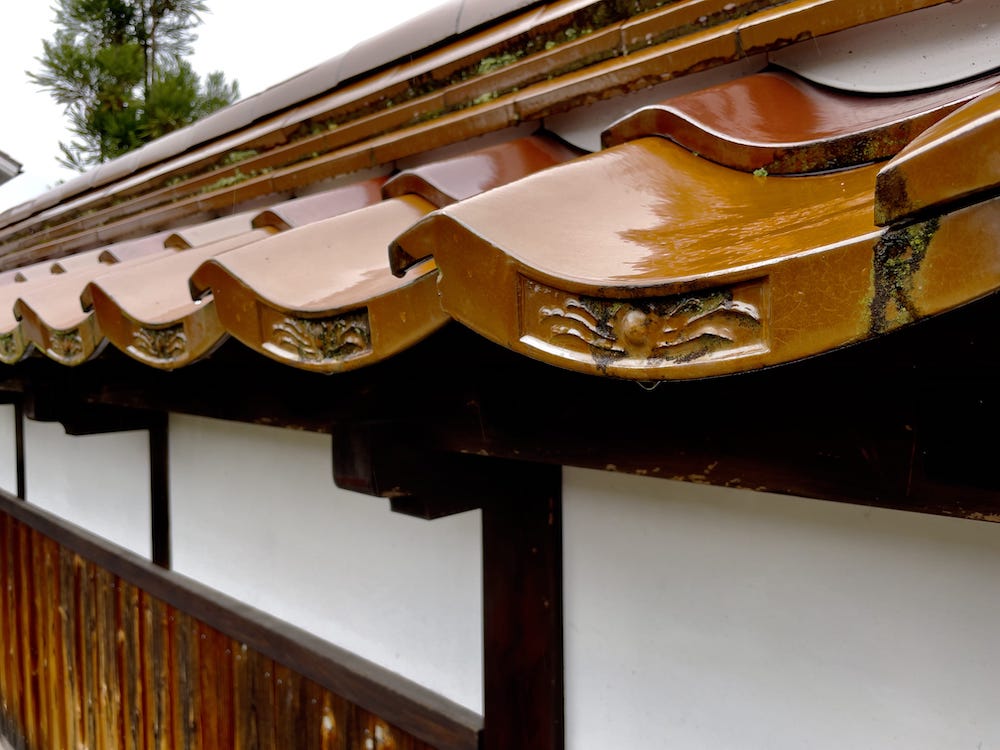 The Tottori sand dunes, our last stop, were quite impressive as well. We got a brief explanation from the “dune meister” then set off to climb the big one that we saw from the top of the stairs. It's about 63m the meister said, and about twice the height of Jockey's Ridge in Kitty Hawk for comparison. The tour had us wear plastic shop bags over our shoes, but not many other people were wearing them and sand got in anyway. It was chilly weather in November, so the jackets we had came in handy. It had rained earlier so the sand was supposedly a little easier to walk on, but it was a bit aerobic to get to the top.

We walked about 1.5km on sand (harder than it seems) then headed back toward the bus, stopping for coffee in the shop in the cool building in the parking lot.

Then it was back on the bus, and back to Okayama to get some last minute omiyage gifts, then head home on the ever-reliable shinkansen. 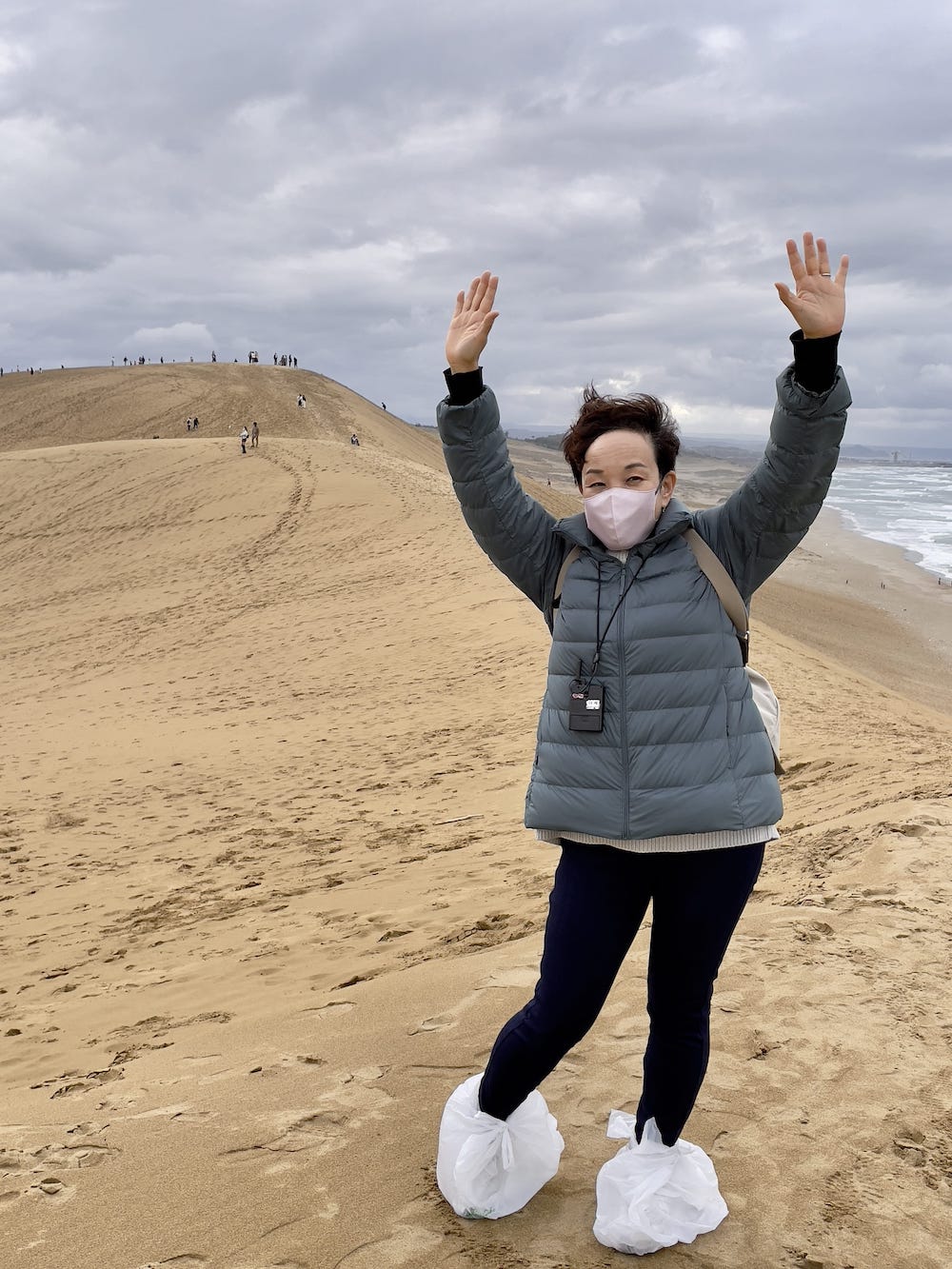 You'll only receive email when they publish something new.

Getting a Driver's License in Japan, an Ordeal

I finally got my proper Japan driver's license, and what an ordeal it's been. Fasten your seatbelts for this one. The incident I've been in Japan since 1987 and did not drive for the first 4 or 5 years. I always have kept my US license current, and after getting married, got and started using an international license. Never had a problem buying cars, mopeds, or insurance using the international license. They expire yearly, and recently had always bought them online via AAA, and they'd come in...
Read post

My wife told me about an awful thing happening in Japan. Some hunters who use "gun dogs" or "scent hounds" to flush out prey, will abandon them in the forest, chained up at the end of the hunting season in early spring, or let them stray, after which they get picked up and taken to a shelter. These people are really scum to be treating an innocent dog so cruelly like that. Rie Kaneko from Chiba set up Gundog Rescue CACI (Japanese) in 1993 to provide shelter and retrain gun dogs, even working w...
Read post